If you know me even a little bit you probably are aware that I am kind of really into Pandora Radio. As if often the case, I was listening to it today at work and for the first time In A Big Country by Big Country popped up on my Jens Lekman station. I got totally psyched as soon as I heard the opening notes because a few years ago this was my ULTIMATE JAM OF THE YEAR. I don't know why I loved this song so much all of a sudden in the summer of 2003, but, before today, I don't think I'd heard it since then. Somehow it doesn't sound the same on computer as it did played from the tapedeck of my stereo. Still, it sounded pretty awesome. This of course reminds me that this year I saw a movie called The Big Country, starring Gregory Peck and Charlton Heston:

The thing about this movie is that it is SOOOOO long. It's like three hours long. The other thing about this movie is that it has the best fight scene in cinema history. I used to give that distinction to Class, with Rob Lowe and Andrew McCarthy, but The Big Country's fight scene is in a whole other category. It's in a whole other galaxy for that matter. Just a The Big Country is an almost ridiculously long movie, the fight scene, between Peck and Heston, is ludicrously long. As you're watching it and it's going longer and longer you're thinking, "what the heck is going on? This is insane. How much longer can I watch these two grown men tussling about in the dim light of evening? There hasn't been a close up since this thing started." But as it goes on and on and on you slowly come to realize that it is the greatest fight scene ever comitted to film. I can't explain it. You just have to watch it. I know I haven't been painting the most flattering picture of the movie, but it is one the best movies I've watched this year. So, to recap, I am recommending Pandora.com, Big Country the band, and The Big Country the movie. Now it's all up to you.

Posted by melroska at 3:28 PM No comments:

So, the craft fair was....bad. I don't know, it was fine, it's just that I didn't sell anything. Which is ok. It was still fun. And I got a buncha buncha books made, and I've been slowly getting those up on my etsy page, and now they are selling like hotcakes! So everything is ok. I just don't think the holiday craft fair at my place of work is the right market for me. But hey, I learned that lesson, and it's important to learn, right? Anyway, do you want to see some of my books? Ok, here we go

I really like this one, it's from this really old atlas (1942!) that I bought a long time ago, but I had never used before. I am really happy with how they turned out, I think they look really great. You can see that I did these a little differently than usual, they have "wrap around" covers and I think they're cool. And since the maps are interesting because they are so old; the world looked pretty different then. I think on this one you can see that there was no Vietnam yet, it was called French IndoChina. These would be perfect for history buffs, they would really get a kick out of them I think.

Not too much else going on, just chugging away making books and knitting a lot. In fact, I taught Steve how to knit! It's pretty cute. He asked me to teach him, I think, because he can't stand that there is something I'm good at that he can't challenge me at. He's very competitive. And I'm happy to report that he's doing really well, he's picking it up very quickly. All my success with teaching people how to knit tempts me to start offering lessons on craigslist or something. Steve is the seventh or eighth of my friends that I've taught the knitting basics, but probably it's different teaching your friends than it is teaching strangers. It's something to think about though, I guess.

Oh, just one more thing. I've been really enjoying this blog lately: mccain blogette. It's written by John McCain's daughter, who is on the campaign trail with him, riding the "straight talk express" or whatever his bus is called. Don't be scared, this is NOT a political blog, it is pretty much 100% fluff, but Ms. McCain is strangely winning. And she has the cutest clothes. But mostly I like it because it is a look at campaigning from a point of view that someone like me (early 20s, female, not particularly interested in politics) can appreciate. And it makes John McCain look really likable, which is a feat; you would think the McCain peeps would be pimping it a little harder, they could probably win some lady voters.

Posted by melroska at 7:52 AM No comments:

mel
Posted by melroska at 9:34 AM No comments:

the BEST sale ever! 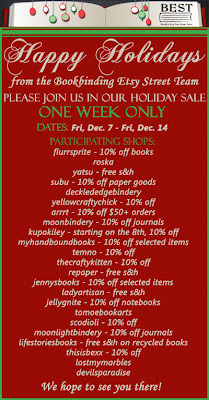 Just wanted to let everyone know, the Bookbinding Etsy Street Team is having a holiday sale, one week only starting today! You can see all the participating shops above, just barely. I'll post later today with links to all the shops. By the way, I'm offering free shipping on everything. Too bad I only have five items....I guess I know what I'll be doing this weekend, in addition to getting ready for that darn craft fair.
I don't want to be all down, so let me end with something good. My MOO cards came yesterday! They are so awesome, I am really really pleased with them. They are so tiny and cute and they have that nice kind of rubbery matte finish; they're just great. I plan to use some of them as price tags at the fair, I think they'll be perfect because they have my website on them and they say thank you and they have a big white space on the back so I'll even have room to write the materials for scarves. I'm getting excited!

mel
Posted by melroska at 8:39 AM No comments:

be careful what you wish for

Okay, I know, I know! I haven't posted in a really long time. I'm sorry. There, now that's out of the way. I've been really busy with class and all kinds of things. I'm working really hard to get stuff ready; I was accepted to be a vendor at the holiday craft fair at my work, but it's on the 14th! So soon! And I barely have anything to sell! Today I started to get a little stressed out. Before, I was just excited at the prospect of my very first craft show, but today I'm nervous. I have sooooo much work to do. I will try really hard to remember my camera that day, then I can post some pictures of my table. I don't know how I'm going to set up, I have a few ideas but I haven't thought about it that much. I'm selling my books and some scarves and maybe some hats. My mom sells her scarves at her work and she displays them in a big vase with the scarves all spilling out, so I might do something like that. I don't know! You should leave a comment if you have any suggestions for me, ok?

I started doing my Christmas shopping today. It's going pretty well, I guess. I found things for four of the people on my list. I'm trying to do most of my shopping online this year, mostly on Etsy of course. I don't really have any ideas of what I want to get for people though, so I'm just browsing and choosing randomly. That's why it's not going especially quickly.


Well, gotta get back to work. I'll leave you with this cool shop I came across on Etsy today. 2ndDraft, they're pretty new to Etsy but they had this bracelet on the front page today. Everything in the shop is made with film; microfilm or regular film. It makes for a really interesting look. I love this clutch:

Posted by melroska at 4:45 PM No comments: